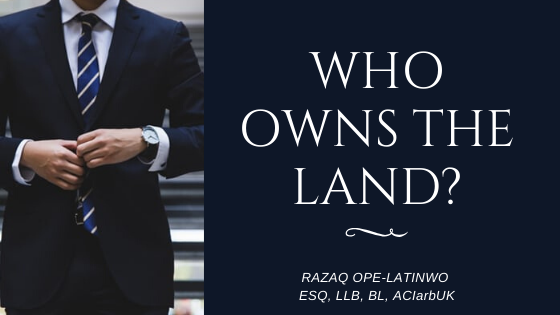 Visiting this article confirms that you have certain questions begging for urgent answers with regards to your land, look no further, let me briefly take you through this voyage of legal discovery. Land is a crucial factor to human existence, flashback to our secondary school subjects; economics and commerce , where we were thought that land is a major factor of production. Coming to this age and time there is no mincing word that land is one of the most important fuel to a fruitful commercial sojourn and a peaceful living. Over the years there has been consistent discrepancies has to who owns a land, legal disputes, physical tussles, traditional conflict, and a host of many social instabilities have characterized land ownership in Nigeria. This piece shall as easy as possible help to address this lackluster and at the same time help you to determine who owns the land in question.

The ownership of land can safely be categorized to the period before the land use act and the period after the land use act. This piece sets out to examine the concept of ownership with respect to land within the confines of the provisions of the Land Use Act promulgated in 1978 backing it up with decisions of the courts. It discusses the positions of the 2 schools of thought on the subject, rationalizes and posits that the underlying intent of the Act was to Nationalise all lands in the country by vesting the beneficial interest in the land in the state, leaving the citizens with determinable possessory rights and beneficial interest in the developments and improvements on the land, i.e as a general rule all lands belongs to the state, one is only assigned at most 99 years of possessory right over the land.

This shall provide the basis for this piece how can you safely conclude that you own a land.

I was in a discussion with a few colleagues sometime ago and as opined in my introductory paragraph they safely gave this conclusion on the fact that the Land Use Act of 1978 (the main legislation on real estate in Nigeria) has transferred the ownership of all lands to the government and it is the government that can pass such ownership title in respect of land to individuals and corporate entities via the certificate of occupancy. This however correct does not appear to be the clear position of law. The law actually recognizes five types of legal land ownership in Nigeria and the certificate of occupancy is just one of them.

2. By acts of Ownership extending over a sufficient length of time which acts are      numerous and positive enough to warrant the inference that they are owners.

3. By acts of long possession and enjoyment of the land in dispute

4. By the production of the documents of title which must be authenticated

1. BY TRADITIONAL EVIDENCE: By virtue of the validity of customary law in Nigeria.  The law recognizes traditional or customary land ownership notwithstanding the Land Use Act. This means in effect that people who have “founded” and “settled” on land over the years in the olden days are deemed to be the owners of such land. Consequently the title of traditional land owners is legal, proper and genuine. They need not have certificate of occupancy to prove their land ownership.

2. BY ACTS OF OWNERSHIP EXTENDING OVER A SUFFICIENT LENGTH OF TIME WHICH ACTS ARE NUMEROUS AND POSITIVE ENOUGH TO WARRANT THE INFERENCE THAT THEY ARE OWNERS: The Nigerian law also gives legal ownership over land to people who cannot by positive traditional evidence show how they “founded” or “settled” on the said land if they can show that they and their ancestors have lived on the land for years without being challenged.

3, BY ACTS OF LONG POSSESSION AND ENJOYMENT OF THE LAND IN DISPUTE. Where the land owner cannot prove their land ownership by positive traditional evidence or show that their enjoyment of the land is not challenged or controverted, but if they can show that their adversaries in respect of the land have failed to take positive legal steps to “wrestle” the ownership land in dispute from them over a long period of time, they will then be deemed to have legal ownership of the said land

4. BY THE PRODUCTION OF THE DOCUMENTS OF TITLE WHICH MUST BE AUTHENTICATED: This covers all instances of formal land documents which will include the certificate of occupancy and other documents issued by the government

It is very important that such documents of title must be premised and authenticated upon the earlier mentioned roots of title. Consequently, a mere certificate of occupancy will not confer legal ownership if it can be shown that the root of title is defective. A certificate of occupancy procured through fraud and misrepresentation will be set aside and considered to be of no legal effect whatsoever.

It is therefore very important that all prospective purchasers, investors or dealers in respect of real estate or landed properties must conduct investigation and ensure that the root of title of such documents of title is good, proper and founded on other evidences of title ownership before any reliance can be placed on them

5. BY PROOF OF POSSESSION OF CONNECTED OR ADJACENT LAND IN CIRCUMSTANCES RENDERING IT PROBABLE THAT THE OWNERS OF SUCH CONNECTED OR ADJACENT LAND WOULD IN ADDITION BE THE OWNERS OF THE LAND IN DISPUTE.: This would probably occur where there is no dispute that a particular vast expanse belongs to a particular persons or persons. Such persons would also be deemed to be owners of smaller surrounding parcels of land if there is no other evidence to the contrary

It is therefore very important that all investors and dealers of real estate in Nigeria inform themselves with this piece of information in order to protect their investment.

Having espoused on the above, it is pertinent to state that certain instruments (documents) which solidifies and sanctions the ownership of land, I shall take these instruments and discuss them in our next article, but they are listed herewith;

Conclusively on this series, we hope, we have been able to serve your elementary desires; we are readily available to handle your land related services. Permit me to end with this quote of ours.